SmartBin Cambodia have a bold aim to transform waste management in the Kingdom by creating a new kind of waste container that leverages on technology to sort waste and encourage more Cambodians to actively recycle.

The group of five young Cambodians have quickly shown their energy and passion for their idea, but they have faced a serious challenge when it comes to securing funding to build their prototype.

“We are seeking about $4,000 to build the prototype and show to everyone that our idea for waste management is possible. We have received support from the government and a number of NGOs, but developing the app and smart bin is not an easy task,” explained co-founder Chanamrithvatey Kim.

The team is not new to competitions and awards, having attended the Technovation Challenge, winning Innovator of the Year at the French-Cambodia Research Day, and now preparing for the Toyota Impact Challenge Final Pitch on 19th January. Yet the need for prototype funding is a present need.

“We are exploring a crowdfunding model to help passionate individuals and organisations in Cambodia to help us realise our funding goals. It is important we get the money so we can continue with our idea,” she added.

Their prototype bin will be divided in separate compartments for different forms of recyclable waste, with sensors that will allow the bin to know whether the right wastes are disposed into the correct compartments. An application is also being developed that will award points to users who correct sorts their waste using a system of QR codes.

Phnom Penh produces 1,200 tons of waste a day and by 2030 it is expected to increase to 3,000 per day. To counter this, Ms. Chanamrithvatey explained that SmartBin hopes to incentivise recycling and change the habits of Cambodians to solve a very visible, and growing problem that affects cities in the Kingdom.

“Waste management is a problem that we see everyday, but there seems to be no effective solution in place. No one loves trash, people hate the bad smell but they do nothing about it, so instead of complaining about the problem, we focussed on doing something about it,” she explained. 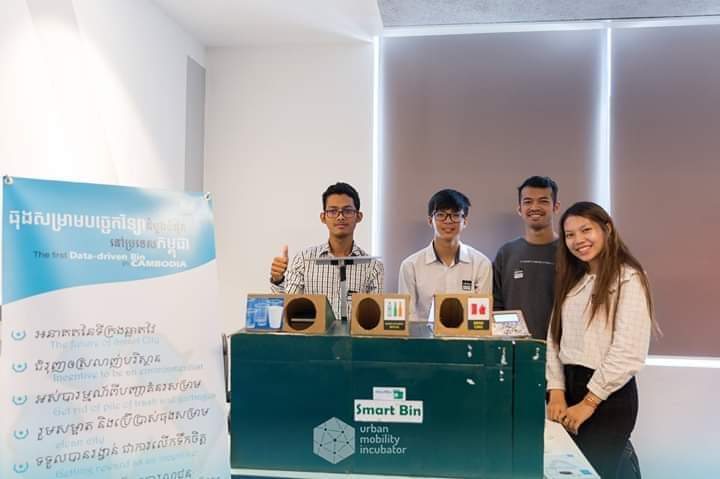 But the young team has met their fair share of obstacles, mostly due to their existing work or study requirements. Their on-going incubator training from Impact Hub is helping, but there is still room for growth. Yet the team is clear on the importance of their project and the need to boost environmental thinking in Cambodia.

“There are many problems in Cambodia that we can see everyday and I hope to see more young people come up with their great ideas, because they have time, opportunity, and there’s people to support them.

“So don’t be afraid and make something big happen.”

Geeks in Cambodia would like to wish the SmartBin team the best of luck with the upcoming final pitch, and securing prototype funding, and we look forward to hear more ideas from Cambodians seeking to apply technology to solve environmental challenges in the Kingdom.